Holy Week celebrations in Totana are particularly well regarded and are among the most important of the Region of Murcia. The processions date back to the 18th Century and nowadays feature 16 different Cofradías (brotherhoods or guilds) displaying nearly 30 splendid images and tableaux, with the old, winding streets of the town providing a perfect backdrop.

More than 3,000 guild members don the Nazarene tunic for the processions; 390 of them being the ‘ladies of Nuestra Señora de la Esperanza’, who wear the ‘mantilla’ (the traditional lace headdress), rosary beads and the devotional scapular and they carry walking staffs in their silent procession on the Wednesday of Easter Week. 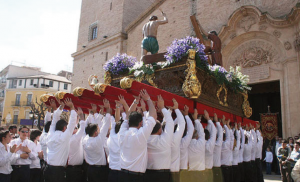 Most of the guilds were formed during the 19th Century, but in the 1930’s the Civil War devastated the sculptures and tableaux in Totana. The regeneration of the Semana Santa celebrations after the War included the foundation of four new guilds, who helped to regain the splendour of the old traditions with new icons.

The tableaux dearest to the hearts of the people of Totana are the Cristo de la Agonía, the Virgen de la Esperanza, Nuestro Padre Jesús Nazareno and Salzillos Magdalena and these items are revered all year round, not only during Easter. The most renowned processions are those on Easter Wednesday, Maundy Thursday, Good Friday and Easter Sunday, and the largest are on the Thursday and Friday. The most famous artists whose works are featured are Francisco Salzillo, Lozano Roca, Carrillo, Antonio Ruiz and Sánchez Araciel. 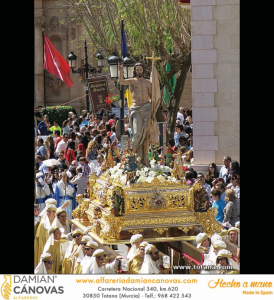 One of the peculiarities of Semana Santa in Totana is the presence of the ‘Armaos’. These are Roman soldiers, whose participation is always warmly applauded by the assembled crowds and the group dates back to the 18th Century, when eighteen men from the most important families in the town dressed as Romans to carry the images of Nuestro Padre Jesús and the Holy Sepulchre in the Good Friday evening procession.

Another important aspect of Totana’s processions is the ‘Bocina’ (siren) or ‘Dragón’, which sounds a sad wail during the parades. It’s carried on a special trolley.

The music and colour of Semana Santa make this a special time to visit Totana, so if you can tie in a visit as part of your Semana Santa schedule, you won’t be disappointed! Tickets for the stands can be purchased for 3€ per procession or 10€ for all of the processions from the Tourist Office in Totana in Plaza Balsa Vieja. All funds raised are destined for the charity PADISITO. 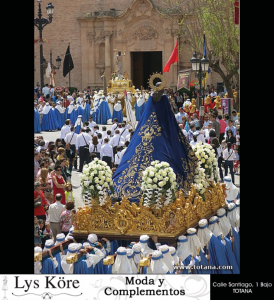 The two main locations are the Parroquiade Santiago, which is in the main square (Plaza de la Constitución), and the Parroquia de las Tres Avemarías, in the Plaza de las Trés Ave Marías close by.

Semana Santa Schedule for 2020 in Totana:

7pm – Holy Mass and imposition of the scapulas of the Cofradía of Jesús Resucitado for new members in the Parroquia de Santiago, followed by the blessing of the new figure of the Angel of the Cross of Triumph.

8.30pm – The Burrica, the little donkey, is taken to the church ready for the Sunday procession.

On this Sunday morning the palm decorations sold for Palm Sunday, along with the palm and olive branches, are blessed outside the parish church and then the procession of La Burrica and the triumphant entry of Christ into town takes place through the streets of Totana. Jesus leads the way on a donkey and is followed by families in their Sunday best, clutching their palm decorations. It’s a charming family event and very well attended.

10.45am – The Blessing of the Palms in the Plaza de la Constitución, followed by Holy Mass in the Parroquia de Santiago. There is also a second palms parade leaving from the little Ermita de San Roque also at 10.45am. This follows a different route.

9.30am – Handing Over of the Flag to the “Armaos” (Roman Soldiers) in the Plaza de la Constitución.

11.45am – The tableaux which will participate in the evening procession arrive in the church of Santiago.

10.30am – Procession from the Parroquia of Santiago with 9 pasos

9pm – Procesión del Santo Entierro, leaving from the Parroquía de Santiago.This is one of the most important processions of the week with 14 pasos.

This is the morning of light and resurrection; the image of Jesus arisen leaving from the Tres Ave Marías and the Holy Virgen de la Alegría leaving from the Plaza de la Constitución at 11am. Each follows its own route then they meet at 12.00 midday in what’s known as an ‘encuentro’, to tumultuous applause. It’s a lovely moment, full of light and flowers.