There seems to be no end in sight to the spread of the Corona Virus, therefore it is imperative that the advice from the authorities and those in the medical profession is followed. The Camposol Medical Centre advises those who suffer from the symptoms (runny nose, sore throat, cough, fever and sometime difficulty in breathing), to stay indoors and call 112.  Medical staff will come to your home and test you for the virus – DO NOT GO TO THE SURGERY.   Close contact with people who are unwell should be avoided, as well as touching eyes, nose and mouth with unwashed hands.  Tissues should be used to catch coughs and sneezes, then the tissues should be put in the bin.  Most and foremost: wash your hand frequently with soap and water, for at least 20 seconds (sing Happy Birthday twice!) each time. The seriousness of the situation is highlighted by the British Consul who has suspended all events until further notice. 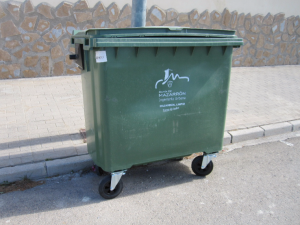 The Council is in the process of replacing the rubbish bins, which are considered to be unusable, throughout the municipality.  In Camposol several bins were replaced throughout the urbanization and during a 2-hour long site-visit from the Refuse Collection Manager and a technician, Silvana was assured that further containers and replacement parts (lids, wheels etc) will be supplied over the next 2 months.   Regrettably, it was commented that Camposolers are not recycling enough, particularly when encountering a general rubbish bin with four 8 litre plastic water bottles piled on the top, standing right next to a yellow plastic recycling container!

Camposol is part of a Municipality of 35,000 residents; all with specific needs and requirements and this Council is addressing a large number of problems with limited resources.

You are asked to ensure that:

– Rubbish is properly disposed of, making use of the recycling bins provided.

– Old furniture and sanitary-ware is taken to the ECOPARK, or that the free collection service of the Council is used. Dumping these items by the dustbins is uncivilised, unhygienic and downright irresponsible.

– Fly-tipping (possibly with photos, car registration numbers, etc) is reported either directly to the Police, or to Silvana on: silvanaeb@mazarron.es

A new ‘NO LEFT TURN’ sign has been placed on the road at the entrance of the Consum car park, to stop thoughtless drivers from blocking the road in order to enter the car park. The car park can still be entered by driving the very short distance down to the roundabout and back up the right side of the road.

The air conditioning in the public area of the Medical Centre has been repaired and the usual bureaucratic documentation for the replacement of the two remaining units is being followed.

Finally, an amendment to the law against pet-fouling in public areas, will include carrying a water bottle to wash down the area where the pets relieve themselves of either no.1 or no.2!

On a happy note… have a most enjoyable EASTER.