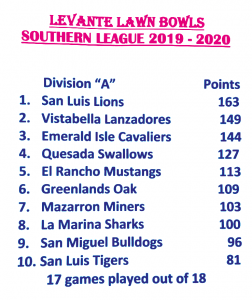 Unfortunately the last match of the LLB League season was cancelled due to the Corona Virus situation.  MBC had anticipated picking up points in the last game to reach a higher place in the final league table, although as a club we are delighted with our seventh place out of ten. We are a small club fighting to stay up in the top division with the bigger elite clubs and we have achieved that!

In March MBC held its yearly Club Championships Finals with the sun out and the wind blowing at times. With an extra day added to accommodate Barbara Benton’s five finals appearances and a day intertwined for the Friday LLB League match, it was four days of hard bowling for some members.

Colin Appleton and Helen Chambers are 2020 Men’s and Ladies’ respective Singles Champions, thus repeating the 2017 result. The full list of 2020 MBC Champions are:

At the close of this season vacancies arise in both positions of Club Captain and the Competition Secretary. Our Captain Jim Coughlan has had an unenviable task during the last four LLB League seasons trying to put six teams of three players together to play each Friday without upsetting somebody! As with all competitive games it is difficult to include everyone fairly and yet maintain a best presented team to each match.  Jim joined MBC in 2012, having started bowling thirty years ago on grass at Clydebank BC in the days when there was a waiting list.  When he met his wife Alex in 2003 he joined Condorrat BC which was where Alex bowled.

Colin Appleton has been our Competition Secretary for the last two years and was involved in coaching before that, but with prime responsibility to look after all MBC domestic competitions of which there are many.  Colin has enjoyed sport since a lad, playing rugby league in St Helen’s and football in Liverpool along with some cricket and golf.  Colin’s intentions was to play golf when he and his wife Gill left Mansfield to move to Spain, but instead joined MBC in 2014 having never played lawn bowls before. As I’ve heard many times “bowls takes over your life!” Latterly Gill also joined MBC and supports Colin by helping with the organisation and administration of the job.

Thank you both and Gill for all your hard work.

Take a look at

www.mazarronbowlsclub.com or email our secretary Harry Male on