Our latest competition at La Riquelme started badly for 3 members who were refused entry to the resort as they had travelled from Alicante which is outside the Murcia region – rules are rules! 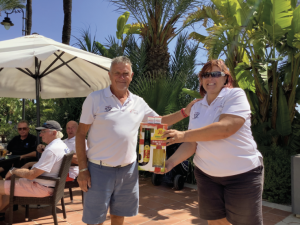 A quick reshuffle was in order with play starting on time. 2 members had elected to walk, but after 3 holes had to hire a buggy as one of them forgot to charge the battery on his trolley! 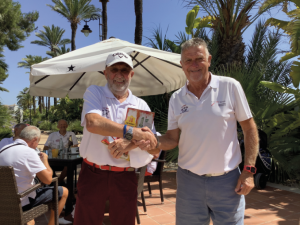 As always with GNK resorts the course was in excellent condition, although some of the pins were in difficult positions; mostly front edge just behind a bunker. The bunkers became the bane of Handicap Secretary Terry Rooke’s life, to the extent that playing partner Martin Hill was giving odds on which bunker he would be in next! 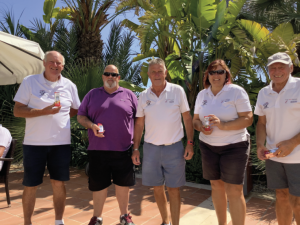 Division One winner with 31 points was Karen Jones who won a boxed set of J & B Whisky and 2 sleeves of Titliest balls.

División Two winner with 27 points was Richard Dixon who also won a J & B boxed set of Whisky and 2 sleeves of Titliest balls.

Our 4 Nearest the Pin winners, each winning a sleeve of Titliest balls, were Trevor Nicholaidis, Martin Hill, Karen Jones and Terry Rooke.

Our next outing is at El Valle on Monday July 13th.  New members and guests, regardless of creed, colour, or sexual orientation, are welcome to join us. Contact by email barrymartin.spain@gmail.com

Festivities in honour of the Patron Saint John the Baptist

150th anniversary of the founding of the Policia Local in Mazarrón