Monday 2nd March and Los Amigos GS, with 40 players, were on their way to Lorca. The forecast for the day was supposed to be cloudy with windy conditions. Well, there certainly was cloud, but the wind was more like a hurricane! I understand the force of the wind was such that it was classed as a storm. The course was in excellent condition and the greens were quite fast and, occasionally, quite difficult to read. The format for our competition was a Texas Scramble which, due to the conditions, was a good choice. If it had been an Individual Stableford, there might have been a few members admitting defeat and declaring the wind as the winner. There were certainly several instances where players hit their ball well, only for it to make a U-turn and land a short distance away. Conversely, when playing with the wind, there were some quite outstanding drives accomplished.

Presenting the prizes, was our Captain, Gordon Neilson: 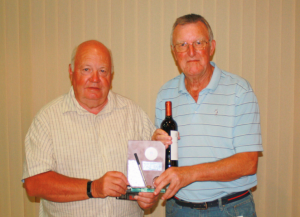 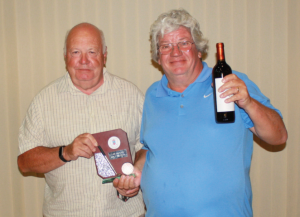 Our Presentation Evening, with an excellent attendance, was held as usual in the Restaurant of Camposol Club de Golf. Our thanks go to the Restaurant staff for the provision of the superb supper meal. Also, many thanks to Warren for the disco music.