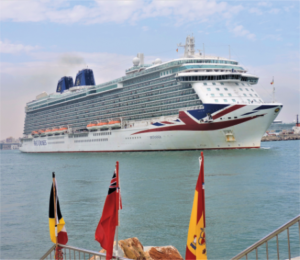 I have just been advised that there will be no cruise ships permitted for calling into Spanish Ports for the foreseeable future due to the dreaded virus and the majority of ships are temporarily out of service, with no definite indication when the season will recommence.

With no cruise ships visiting Cartagena, I have been unable to be on hand as previously, to welcome the ‘arrival’ or salute vessels’ ‘departure’ with my flag display.

Possessing a number of nations flags, including that of the Spanish, I display where possible, depending on the ship’s nationality or that of the owners, situating  myself normally at Fuerte de Navidad (Christmas Fort) or Faro de Navidad (Christmas Lighthouse), taking photographs to post on Facebook  within a new group  named Costa Cálida Maritime.

For interest sake included here are a number of pictures of ships that visited Cartagena prior to lockdown. 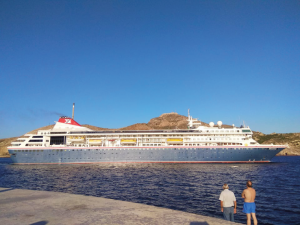 Cruise vessels that visited Cartagena are mainly ships operational within Europe during our winter season. One is the P & O Cruise Line vessel ‘Ventura’ pictured with the ship passing close to shore at Christmas Fort on departure. I was offered the opportunity to wave ‘away’ with assistance of friends by vigorously waving the P & O ‘house flag’ together with the Red Ensign I possess.  As usual many passengers were on deck and within their balcony cabins, acknowledging. 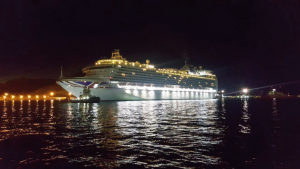 Built in Italy the ‘Ventura’ is currently the second largest of seven ships operated by P and O cruises for the British market.  Although operated by P & O, it is actually owned by Carnival Cruise Line of USA.  It is able to accommodate 3,192 passengers with 1,550 cabins. There are 8 restaurants, 6 boutiques, 5 pools and 3 show lounges, including one claimed to be largest theatre currently on a British ship. 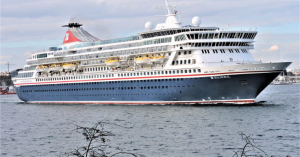 Also visited Cartagena recently was ‘Balmoral’ (pictured). It is not very large, but is the largest ocean-going ship within the fleet of Fred Olsen Cruise Line. 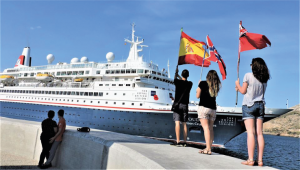 Other ships within the fleet are all regular visitors; ‘Braemar’, ‘Black Watch’ and ‘Boudicca’. These are small enough to navigate size restricted waterways such as the Kiel Canal.  ‘Balmoral’s’ capacity is 1,325 passengers with 710 cabins, 6 restaurants, a swimming pool, jacuzzi, spa and gym. Departure ports include Dover, Southampton and Liverpool.

‘Saga Sapphire’ was also a recent vessel to visit, operated by Saga Cruises and advertised as ‘the British Cruise Company exclusively for over 50’s’.  Many extras included on their cruises are, return chauffer service from airport to ship, all on-board gratuities, Wifi Internet and much more. Departure ports include Liverpool, Newcastle, Rosyth, Southampton, Dover, Bristol and Tilbury.

‘Viking Sea’ is Norwegian owned and is the most recent vessel.  It was here on Saturday 13th April on a cruise that commenced from Barcelona and departed from Cartagena on passage to Malaga. The itinerary included Falmouth and Portsmouth, completing Bergen, Norway.