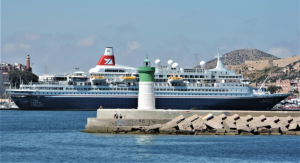 The ‘Chronicle’ editor kindly suggested that for this month’s contribution a cruise ship is presented on the front cover and I gladly agreed to supply a suitable picture from my collection.

Due to the Virus Pandemic, there are virtually no cruise ship activities around the world, obviously resulting in having no vessels calling into Cartagena for a number of months, nor indeed unfortunately it seems for the foreseeable future. I therefore am posting within my Group on Facebook, pictures mainly of maritime movements from my large collection I have amassed whilst living locally. 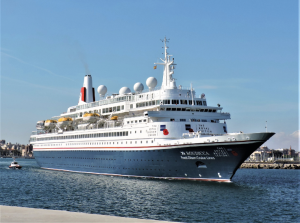 My cover picture is that of a vessel owned by well-known Fred Olsen Cruise Lines; the ship ‘Boadicca’ is being waved away by three enthusiastic helpers assisting in our ‘bon voyage’ salute on departure from Cartagena on 29th May last year, 2019. Our salute consisted of the Spanish, Norwegian and UK maritime flags. 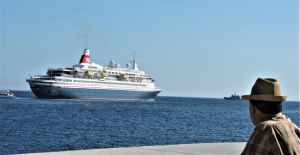 Within this contribution is a picture of the fine looking ‘Boadicca’ alongside at the cruise terminal, plus a second picture of the ship being waved away by the volunteers who were on site with myself at Christmas Lighthouse. 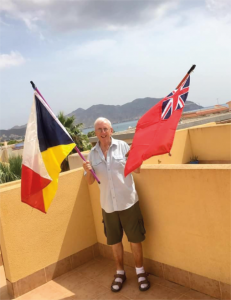 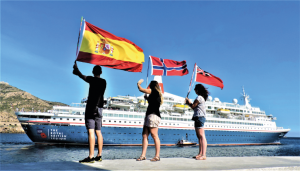 Pictures include some of the flags I display where possible as a welcome and/or wishing bon voyage on cruise ship departures.  These flags include the Spanish and that of the ship’s nationality, plus ‘house flag’ if within my collection. Included is the P & O house flag. P & O Line is like the majority of other cruise operators worldwide; severely affected by this dreaded virus, resulting in fleets being decimated.  The P & O parent company sold one of its popular ships, ‘Oceana’, previously well known within the UK market and is now unable to take delivery at this time of their new largest addition to the fleet, ‘Iona’. 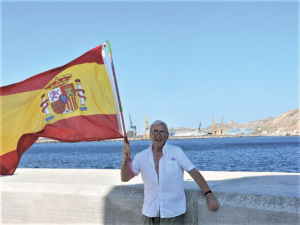 Some good news is that the German company Mein Schiff – Cruise International are offering 2 and 4 day cruises which commenced at the end of July from their Hamburg base, although these seem to be ‘at sea’ ONLY within the North Sea. I understand that other lines are considering short ‘at sea’ cruises or round UK once bans are lifted, hoping to boost passenger confidence, which seems to be the end of October at the earliest. 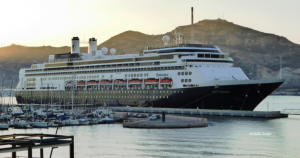 I am pleased to announce that with the many changes within cruise fleets worldwide due to the dreaded virus, recent news is that Fred Olsen Cruise Line have agreed the purchase of two ships. The two ships were previously ‘Rotterdam’ and ‘Amsterdam’ of Holland America Lines, now to be renamed ‘Bolette’ and ‘Borealis’ hopefully to be available when the cruise market reopens resulting  in Fred Olsen Cruise Line operating a fleet of 6 ships.