As I start this article it is 1st May and we have just completed 7 weeks of lockdown. Like everyone else, I have been at home with my wings clipped, apart from short shopping trips to the local supermarket every fortnight. However, it was announced that we can go out for exercise for an hour a day, up to 1km from home and we can choose when (we live in an area with less than 5,000 people). On reflection, it isn’t much freedom, but gosh I am so looking forward to my walk and I am already feeling excited! If it wasn’t clear before, I’m sure we all recognise now that we are animals that require our fix of fresh air, outdoor space and a link to the natural world. Nature appears to be a balm that soothes us and for mental wellbeing is as essential as the air we breathe.

Just as an aside, I wonder if people who still persist in keeping wild songbirds in small cages in their apartments and balconies have reflected on the cruelty of life in such a confined space!

It seems strange to be thinking of ‘Birding in Murcia’ and maybe this month’s article would be more appropriately called ‘Garden Birds’ or something similar, but on the positive side it has been an opportunity to look more closely at what is living close to home. I have seen quite a lot of species; 34 in fact, with several that don’t really fit the definition of ‘Garden Birds’ and will probably make some people a bit envious. It helps being in a rural area, in a valley between two mountain ranges and from the roof terrace there are excellent views across the surrounding countryside. It means that you can see birds that are around the house, but also glimpse what is further afield and flying up and down the valley.

The birds seen close to the house are the common ones that like to associate with human habitation. As you would expect there is a small colony of House Sparrows (Passer Domesticus) that can be seen on the roof noisily gossiping away with their neighbours. Nowadays there are 4 or 5 pairs of Collared Doves (Streptopelia Decaocto). This hasn’t always been the case as they are quite a recent arrival in this part of the valley and in fact, 7 years ago it would have been a notable sighting. I may have mentioned it in a previous article, but it is a species with an interesting recent history. Although it is generally sedentary and doesn’t migrate, it is relatively new to Western Europe and only arrived in Spain in 1960 (Asturias).

Prior to this, it was just a species of temperate and sub-tropical Asia. Since its arrival, it has rapidly colonised the rest of Spain and is now one of our commonest birds; quite a remarkable development. It has been a similar story in all of the European countries (arrived in the UK, in Norfolk, in the 1950’s). According to a published paper on the subject, there was a genetic mutation in the species that allowed it to adapt to the European climate thus enabling its exponential growth in a zone where it was previously unknown. I cannot verify that this theory has been scientifically proven, but it is as good an explanation as I’ve heard.

I have also been kept amused by our local Sardinian Warblers (Sylvia Melanocephela) as I tried to identify how many pairs there are in or close to the garden. They are always quite vocal, but even more so in spring as they try to ensure that rivals don’t encroach on their territories. There are possibly at least 3, if not 4 pairs, nesting near to the house.

As April progressed, more summer visitors were being seen and heard. The first Cuckoo (Cuculus Canorus) started calling during the 2nd week and birder or not, it is always a pleasure to hear these harbingers of spring. However, it stayed frustratingly just out of range of the house and up until now I haven’t caught a glimpse of one. In case you are wondering, it is the male that makes that famous and enigmatic call. The female tends to be a bit sneaky and keeps hidden and quiet; all the better for sidling into someone else’s nest!

The following week a pair of Great Spotted Cuckoos (Cuculus Optatus) turned up and have been highly visible and very noisy as they play hide and seek with the local Magpies. They are brood parasites of Magpies (Pica Pica), so not very popular, but watching the two species chase each other around the adjoining hillside is highly entertaining. I will know who won the game of Hide and Seek in a few weeks if I see a young Great Spotted Cuckoo flying along with its foster parents.

One of the spring events to look forward to every year is hearing the beautiful, loud, fluting whistle of the male Golden Oriole (Oriolus Oriolus) and it was in the 3rd week of April that the first one was heard. The males arrive first and set up territories whilst waiting for the females to join them. Each year, I have enjoyed the sight of at least 3 birds flying around from song post to song post laying claim to their boundaries. This year I spent several hours sitting by the bedroom window trying to get a photo of one on a nearby dead tree, but true to ‘Murphy’s Law’ it steadfastly refused to perch there whilst I was at the window. However, I did manage a partial victory with a photo of one in a dead pine opposite the house, but unfortunately, not as close as I was hoping. 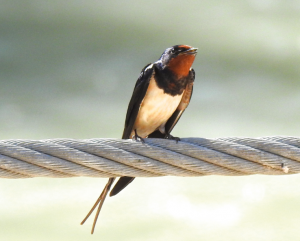 Other summer visitors started to arrive more or less at the same time and the happy chattering sounds of our local Barn Swallows (Hirundo Rustica) and Red-Rumped Swallows (Cecropis Daurica) are a good tonic if you need cheering up. Both species of Swallow appear to be nesting in the old abandoned house nearby as they are perching close by and flying in and out of an open window.

They are similar looking birds, but the Barn Swallow has a blue-black breast band with an orangey-red throat and forehead whereas the Red-Rumped Swallow has a pale whitish-red rump and no dark breast band. It also has a different facial pattern, with orangey-red cheeks and a dark blue cap.

I am now trying to keep a watchful eye on the group of Bee-Eaters that have been regularly flying overhead as I would like to photograph them at this year’s nesting site. When I can leave the house for exercise there will be a better chance of finding the nesting tunnels that they excavate in sandy banks and cliffs. There are plenty of suitable places for them to investigate in the rambla below the house so fingers crossed that they choose somewhere nearby.

In the rambla there will be a few other nesting sites that are worth looking out for. A pair of Choughs (Pyrrhocorax Pyrrhocorax) have been flying up and down and in previous years they have nested in a cavity in the cliffs. Like Bee-Eaters, they are another bird that you are likely to hear before catching sight of them, as they frequently call to each other in flight. It is difficult to describe, but once heard, the highish-pitched ‘chi-ah’ seems to cut through the atmosphere and is easily recognisable for future reference. These birds are members of the Crow family, about the size of a Woodpigeon, but with a sleeker, shiny black plumage, bright red down-curved beaks, feet and legs. They are extremely agile in flight and will frequently embark on aerial acrobatics. They are a delight to watch, but there is probably no serious motive behind the behaviour except the sheer joy and fun of being able to do so. However, from a practical perspective it is good practice for avoiding aerial predators.

Another bird that first reveals its presence by sound is the Iberian Green Woodpecker (Picus Sharpei). Locally, there is an active pair that are very vocal with their loud, shrill and explosive call sounds and their equally loud, series of laughing sounds that is actually the song. It is likely that they have a nest in a nearby Olive tree where they will have excavated a hole in the trunk. Until genetic studies were carried out, it was thought that the Spanish birds were the same race as the European Green Woodpecker (Picus Viridis), but recent studies have identified it as a separate species. If you a birder who keeps a list, then if you haven’t already done so, you may be able to add this as a new tick. The main plumage difference between the species is that the black colour around the face of European birds is more or less absent on the Iberian birds.

At the beginning I referred to a couple of my garden birds that aren’t normally described as such and you certainly wouldn’t find them at the bird table:

The first one is the incredibly well camouflaged Stone Curlew (Burhinus Oedicnemus) that calls from the field behind the house.

Secondly, an adult Golden Eagle (Aquila Chrysaetos) has been hunting in the valley quite frequently and is likely to be one of the resident male birds that have nearby territories.

Finally, a pair of Short-Toed Snake Eagles (Circaetus Gallicus) has been seen almost daily and appear to be setting up home somewhere nearby (well, I hope so).

Last, but not least, many thanks to a good friend, Juan Lopéz García, for allowing me to use his excellent photos of a male Sardinian Warbler feeding on a pomegranate, Short-Toed Snake Eagle in flight and a juvenile Iberian Green Woodpecker.