In the last few weeks I have been out and about quite a lot visiting many of my favourite birding sites and a few new ones. This hyperactivity is due to the frustrating weeks of lockdown restrictions and a desire to undertake research for a new project; a birding book about where to see birds in Murcia and it includes a checklist of all the species that have been recorded here. I have had plenty of spare time to do internet research and start writing during the last three months and it sort of kept me out of mischief. However, I have now been visiting lots of different sites to make notes and take photos.

Having a hobby which requires being in the countryside and observing nature has been an advantage as you can go out and hardly meet anybody, especially if you avoid the weekends. Mind you, not many people visit the often smelly water treatment plants that I do, even at the weekend!

At El Hondo Nature Reserve in Alicante province there were two things that really caught my attention: 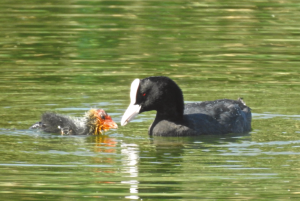 One was the number of proud new parents and their offspring. These included a Coot (Fulica Atra) feeding a very young and ugly chick, a Black-Necked Grebe (Podiceps Nigricollis) with an older, fluffy and cuter chick and finally a Glossy Ibis(Plegadis Falcinellus) with a very mature-looking sort of teenage chick. 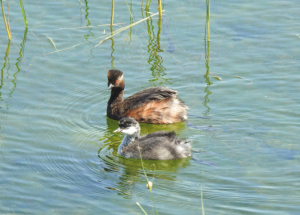 The second thing was the number of Glossy Ibis (Plegadis Falcinellus) that seemed to be everywhere. These long legged birds, with very long down-curved beaks, are related to Herons and Egrets. From a distance they appear to be a uniform black or dark brown colour, but seen closer and with the light catching their plumage, they are transformed. The almost metallic purples and greens of their feathers truly justify the use of the word ‘glossy’ in their common name. They feed in shallow waters looking for insect larva, shellfish, worms and snails and especially a non-native invasive species called the Golden Apple Snail. This latter wee beastie can cause considerable damage in rice fields, so Ibis can be very useful birds for controlling the population of these foreign invaders. 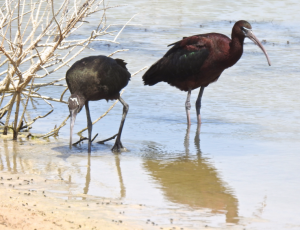 Glossy Ibis became extinct as a Spanish breeding species during the 20th century and only started to breed again in 1993 when one pair nested at the Albufera de Valencia. Since then, the population has expanded very successfully and breeding colonies are now well established in Coto de Doñana, the Ebro Delta, Albufera and at the El Hondo wetlands. As I mentioned last month, four pairs bred at San Pedro del Pinatar this spring and they are now being seen in many areas of the region. It is probable that they will start to breed at a number of our Murcian wetlands in the next few years, particularly if their population expansion continues at the current rate. 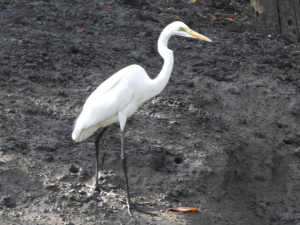 The closely related Herons and Egrets are a group of birds that are very well represented in our region where the majority of the European species is present at some time of the year. Egrets are long-legged birds with all-white plumage; most of you will have seen them around and about on your travels. However, identifying the different species can be a bit challenging at first.

The Great Egret (Casmerodius Albus), standing at one metre tall, as its name suggests, is the largest of the 3 species. It is the same size as the more familiar Grey Heron (Ardea Cinerea). It suffered a major decline in the 19th and early 20th centuries due to the commercial demand for its elegant plumes as a fashion accessory on women’s hats. Consequently, the bird was a bit of a rarity as it became restricted to its main population areas in Russia and Eastern Europe. Thankfully, it is now recovering well and expanding back into Western Europe and in 1997 started to breed again in Spain. It still isn’t particularly common, but it is being seen more frequently around the Mar Menor, especially in winter. It can be easily identified by its greater size compared to its smaller cousins, but if seen by itself, can also be recognised by its stout yellow dagger-like beak and dark legs. The other strange feature is an angular S-shaped kink in its neck, when it is not out-stretched. Bill and leg colour does change during the breeding season, but for the moment it is unlikely to be here, or if so, it will be in non-breeding plumage. 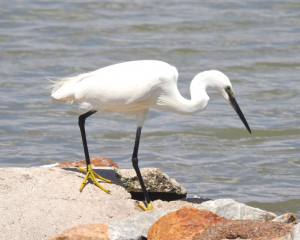 The Little Egret (Egretta Garzetta) standing at 55-65cm is about 2/3 the size of its larger cousin and is an altogether much more elegant bird; quite slim and with a long, black, stiletto-shaped beak. It has black legs ending in yellow feet and in summer has very fine plumes which also attracted commercial attention in the past. It has much more of an affinity to water than its very common relative, the Cattle Egret (Bubulcus Ibis). As a rule of thumb, if you see an Egret fishing it is probably a Little Egret. If you see one in a field or a flock, particularly around grazing animals, it is most probably a Cattle Egret. 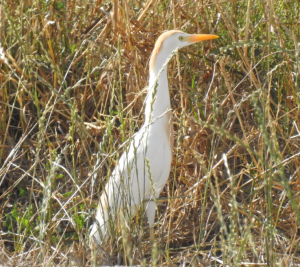 At 52cm in height, Cattle Egrets are smaller and less elegant. They are stockier birds with yellow beaks (juveniles dark) and legs. Although they breed in reeds on wetland sites, they normally feed on drier farmland and often associate with livestock. It is not uncommon to see one perched on the back of a goat or a sheep.

In summary, to identify any of these White Egrets, size is important! After that, always check the beak shape, beak and leg colour and the habitat will also give you a clue.

There are five other close relatives that belong to the Heron family and are well represented in the region. Three species are principally summer visitors, one resident and another that visits occasionally and mainly in winter. 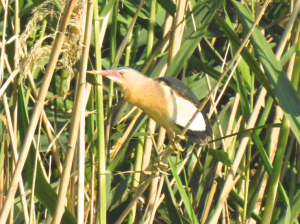 The three summer visitors are: Little Bittern (Ixobrychus Minutus), Black-Crowned Night Heron (Nycticorax Nycticorax) and Squacco Heron (Ardeola Ralloides). The Little Bittern is the smallest and about the size of a Pigeon, but with a more erect stature. It breeds at several of our wetlands, but is somewhat difficult to spot unless you see them flying and then landing in the reeds. 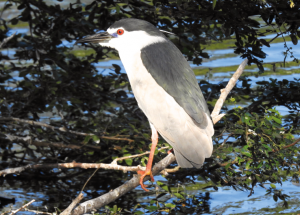 The Black-Crowned Night Heron also has a clue in its name. As you have probably guessed, it is mainly active at night searching for fish, frogs and insects at the side of rivers and lakes. It is taller than its little cousin and stands about 65cm high with a wingspan of nearly 1mtr. Near to the town of Blanca it nests with Egrets and Herons on the reed islands in the shallow lake of the Azud de Ojós. During this busy period, it can often be seen on the islands or flying along the River Segura in the evenings on its feeding trips between nesting and hunting grounds. 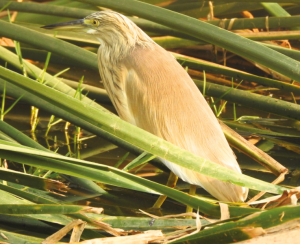 The third one of our three amigos is the Squacco Heron and at nearly 50cm tall it is intermediate in size between its two relatives. Its plumage is light brown or straw-coloured in order to blend in with the reed beds it frequents. The striking thing about this bird is at take-off, when it transforms itself from the well camouflaged bird into a sudden explosion of white. It is always a delight to see this magic show. 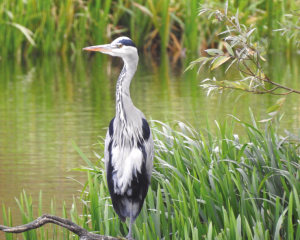 The common and resident family member that can be seen in most places where there is water and sufficient fish and other prey is the Grey Heron (Ardea Cinerea). It is well known for waiting patiently on the water’s edge for a living meal to come within range of its lethal dagger-shaped beak. At 1mtr tall it is a formidable looking predator if you are the item on the menu.

The Purple Heron (Ardea Purpura) at 90cm is just bit smaller and tends to be a bit shyer than the Grey Heron. Its plumage colouration allows it to remain well hidden along or amongst the waterfront vegetation as it hunts. As mentioned earlier, it is probably the least common member of this family and it is more likely to be around in the winter time. 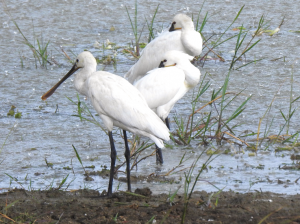 I will conclude with just one more closely related species, the Spoonbill (Platalea Leucorodia). This is another bird with a clue in its name. They are all white, about 90cm tall with long black legs and a most peculiar-shaped beak that looks like a spoon if seen from above. When feeding, it sweeps its beak from side to side through the water searching for the insects, molluscs, crustaceans, tadpoles and small fish on which it feeds. They are summer visitors, but not to our shores. The majority of Northern European birds migrate to Africa in the winter. However, birds from Spanish colonies in Western Andalucía mainly remain in the Iberian Peninsula and wander around during the winter. Thankfully, these delightful and unusual looking birds like to spend at least a few weeks along the coast of the Mar Menor visiting sites such as the shoreline of El Carmolí, the Saltpans of Marchamalo and San Pedro del Pinatar.