July! That’s half the year gone and we are all sliding into darker nights and Christmas! Time really does fly! 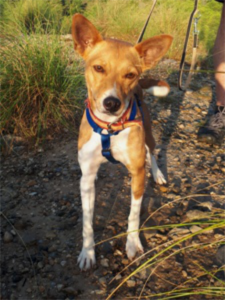 Here at the Rainbow house all is well.  We had a storm last week and are now sorting out a devastated garden. It was a storm I don’t think I have seen the likes of in my 71 years!  –  Winds swirling hailstones like golf balls that were dropping so thick it looked as if you would not be able to breathe if you went outside. We were convinced our car and van would be dented, but luckily not. The dogs slept through it, but later had great fun in the hailstones a few inches thick on the ground. Then the Spanish sun came out and apart from the devastation, all signs were gone in an hour. 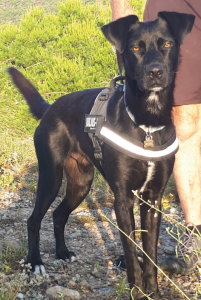 Talking of dogs, we now have three here at the moment – one permanent and two fosters with another foster coming on Friday. As many of you know we are involved with the charity Friends of Mazarrón Animals who help abandoned/mistreated animals in our area.

Could you foster? We can find any animal a home eventually, but it’s the time from taking them on to finding that home that is always the (often expensive) problem. We can cover any expenses and even supply a box of tissues when they eventually leave! – but then you could help another on its way.

Regular readers will know that a month or two ago I reported on the demise of any new FREESAT boxes and at the time there were just no recording boxes available. We had contacted the manufacturers, but only got the answer that they had lost the contract with FREESAT to make the boxes.  It has now come to light that FREESAT are marketing their own boxes – all completely new designs – and these will be the only ‘official’ FREESAT available on the market with all the FREESAT functions. Of course there are other satellite boxes that can be used to watch TV, but these will not have ‘logical’ channel numbering/order, red buttons, TV listings (EPG) and automatic updates with ‘easy to use’ recording functions.

We have a new FREESAT recording box on order and will report on it next month.

I know we ‘worried’ a lot of people when we said ‘no more recording boxes when yours fails’, but now retract that!

Internet TV (IPTV) has come on so much since its inception just a few years ago. Not only have the IPTV companies learnt and developed, but equally, so have the internet providers. TV was such a demand on their services that many just did not cope, but most have learned and IPTV is the way we will all be watching TV within about 5 years.  There has recently been so much social media chat about two illegal IPTV companies being shut down – well yes they were, but if you read the reports it was more about the €15 million undeclared to the Spanish tax authority than the broadcasting of TV by internet! (Incidentally, Rainbow Satellites are fully legal and we pay our taxes – sometimes it feels we keep the Spanish system afloat!).

It has never been tested in court, but it will also depend on the content transmitted. All we advise our clients is that should something happen to stop our service, we will either supply an alternative, or refund any outstanding subscription – not many providers say that!

If you have had a ‘bad’ Internet TV experience, and we know many have, then give us a try for a free no-obligation demonstration and a free loan box for a week so that you can properly appreciate the system. Just give us a call.

Finally, we hope you have all survived lockdown and are now coming to some sort of normality. At the time of writing we are fully back out working – wearing masks and social distancing – but if you have any TV problems contact us and we will do everything possible  to sort them for you.

Rainbow Satellites SL – the company for all your TV needs in the Murcia region of Spain. Contact us for free friendly advice on any TV issue. rainbowsats@gmail.com