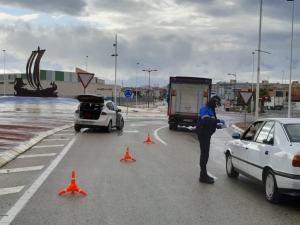 The Local Police, together with the Civil Guard, continue to carry out controls at the main accesses to the urban centres so that the confinement regulations are complied with. The Police have so far processed a total of 205 complaints by the State of Alarm, especially for displacement without just cause. Some have also been recorded in establishments that have not complied with the opening regulations, especially at the beginning of the entry into force of the Royal Decree.

Among those reported for unjustified displacement is a driver who was driving without permission and who tried to deceive the agents by showing his twin brother’s driving license. The corresponding judicial proceedings were also directed against the individual. A neighbour from Mazarrón was also denounced for repeatedly violating the confinement orders transferred by the agents, repeatedly riding his scooter through some streets of the municipality.

Likewise, the Local Police has carried out some 150 surveillance actions on homes in which the Ministry of Health has ordered quarantine where positive cases have been found or with symptoms that could indicate the disease. If during the verification, the affected party reports that he needs something, the agents transfer the need to the Social Services of the City Council.

In addition, the Local Police, Civil Guard and Civil Protection, have continued with the distribution of the rest of the 6000 masks sent by the Government Delegation that have been delivered to strategic points in the municipality, both in the main towns and in the farms, as well as bus stations and establishments whose opening is authorized by the State of Alarm. A measure that complements the safety in the return to work activity of some workers, which must be extreme with continued hygiene of the hands and the maintenance of the safety distance between workers.