Miracles on the Camino May 2020

Miracles on the Camino May 2020

This is the penultimate article by retired journalist Mike Gardner from Calasparra, on his walk of the Camino de Santiago, an 800km pilgrimage across the north of Spain. Mike was so moved by his experiences that he wrote a book called Miracles on the Camino, and we have been serialising his blogs which were followed by thousands of fans across the world.

Mike, who has been walking across Spain for 27 days, meets a remarkable woman from Canada

Somewhere around Fonfria, I came across a remarkable woman called Janice. We had met briefly a few days before when my services as a reserver of beds were required as it was getting late in the day. Janice is from Canada and she is 66, the same age as me, but we had a whole lot more in common than that. She is a nurse from Vancouver and within five seconds of meeting her again, I knew the next few kilometres were going to fly by.

If you haven’t experienced the Camino and you can’t quite figure out what goes on here, if you met Janice, she could clear it all up for you very quickly. Within a few minutes, we were getting right into our life stories and Janice was opening up about her family in Vancouver. How about this! 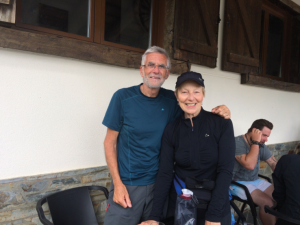 Janice, from Canada, who bought my lunch at Tricastela

She has two daughters and there are just seven months between them. Work that out. Janice and her husband already had children, but they wanted more and news had reached her that a 15-year-old local girl was having a baby and authorities were seeking a suitable family, so they volunteered their services, which must be one of the most selfless things it is possible to do. Soon after, Janice fell pregnant, but she is not the kind of person to go back on her word and you can be sure there were a lot of nappies getting washed a few months later. Janice spoke about her love for her family and the ups and downs of her life which were plentiful and not always positive. Her husband, who is a few years older, was badly injured in a work-related accident on a fishing boat on the Pacific Ocean, but Janice has an incredible talent for ignoring negatives and multiplying positives. She said, with utter certainty, that his accident had saved his life as he was a workaholic who couldn’t switch off and the accident had forced his retirement!

We walked by an 800-year-old chestnut tree before arriving in Tricastela around 1pm when Janice insisted on buying me lunch, though I don’t know why. I hope our paths cross again, but one thing for sure is she will be standing in front of the beautiful cathedral in Santiago in a few days and I pray that I will be there, alongside her, to share our joy together.

After lunch I walked a few hundred metres and came across Paul, who is ‘something big’ in the city in marketing. Paul, who was born in Belfast, is taking a casual attitude to planning to a new level. His phone was broken and he had lost his map and he didn’t know where he was, where he was going or how to get there, so he got stuck with me for three hours. He said he had taken his phone to a shop somewhere behind us; in Astorga, I think he said, but he left with a very bad impression of customer service after being told it would take six weeks to repair. “Could you wait?” they asked him!

Paul is another fascinating person and at times it seems to me that the Camino has some kind of supernatural vetting system that means all the people I meet have enriching stories to reveal and are looking for a good listener to share them with. We had a lot in common due to my newspaper background and Paul described his chaotic life in London and how he is constantly being head-hunted by the world’s most successful companies. He told me about working in San Francisco and New Zealand and many other exotic cities. Paul is walking the Camino because he is fed up with the pressure and the 16-hour days. He turned down a job in Berlin on 1,000 dollars a day to come here and it was a decision he hasn’t regretted; not for a moment. He is not flash at all, but I got a hint of his standard of living when I dragged out of him that his designer sun glasses set him back more than £800! Whatever he decides to do with his life, I know he will be a success; he is that kind of man – driven and focused. 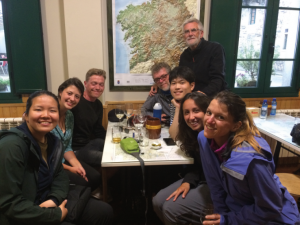 Getting ready for a few beers with one of my Camino families, listening to Tamla Motown records, in the Hostel Victoria, Samos

We arrived in Samos around 3pm and the Camino had one last gift for me. Sitting outside my albergue was Andrea, the Italian man whose credit card I found after divine intervention. He told me that two of my Camino family were here and he pointed across the road and there they were; Spencer, the charismatic Australian and Rebecca, the Brazilian girl who was a teacher in the town I was born and at the school my children attended.

Hostel Victoria provided the perfect location for another magical Camino night where we drank too much wine and beer with Tamla Motown records providing the perfect background music to a raucous celebration. The proprietor’s favourites seemed to be Marvin Gaye, Smokey Robinson, The Temptations and Martha Reeves, which was just fine for the rest of us, as the small bar echoed to the sounds of tambourines, bass drums and sweet soul music. Tomorrow is going to be a special day. If all goes well, we will be less than 100 kilometres from Santiago.

Miracles on the Camino can be downloaded directly onto your Kindle, mobile, tablet, or computer from Amazon books for 4.32€. It has 173 pages and more than 80 pictures. It is also available as a hardback and can be delivered to your house in Spain.