Miracles on the Camino June 2020

Miracles on the Camino June 2020

Retired journalist Mike Gardner, who lives in Calasparra, Murcia, walked the Camino de Santiago, an 800-kilometre pilgrimage across the north of Spain. Mike, who is 68, was so moved by his experiences that he wrote a book called Miracles on the Camino, and the Costa Cálida Chronicle has been serialising his blogs, which were followed by thousands of fans across the word. Here, in his final blog, Mike finally arrives at the cathedral in Santiago.

I joined Dr Yasmin outside our albergue, high above the city and we began walking towards the cathedral spires, glimmering in the morning twilight. She told me about her father, who was also a doctor in Sao Paulo and her mother, who was a professional ballerina, long since retired. Yasmin planned to continue her tour of Europe before returning to Brazil where she will begin her training to specialise in the care of children. She said it would be several years; six I think.

I had a sadness inside me that I had lost touch with my ‘Russian son’ Kazim, whose phone was always malfunctioning and made him impossible to track down, but somehow I had a feeling my Camino might have one last gift for me, waiting in one of the holiest cities in the world. I had managed to communicate my whereabouts to his wife, Elizabeta, a few thousand miles away in Moscow. She had held a brief conversation with the Big Man to let him know where I was and what time I was expecting to arrive in the city. For some unspecified reason, he had fallen way behind me, but he had told Elizabeta to tell me that nothing was going to stop him meeting me in Santiago, alhough, according to my map, he would have to walk more than 50 kilometres the day before to catch me up. 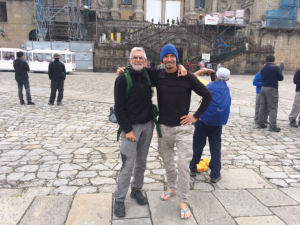 In front of the cathedral with my Camino hero Kazim

After around an hour he was there and somehow I wasn’t surprised. I could see Kazim, with his blue bobble hat standing out sharply against the white stone walls. We embraced and kissed each other and shared our recent experience. Kazim is so charming and affectionate that crowds form around him – he draws people to him by the force of his personality – the Pied Piper from Moscow.

I took Kazim to a restaurant called Casa Paredes for breakfast, along a side street, 100 metres from the Praza de Obradoiro and the cathedral, which I still hadn’t seen. I wanted to be ready to take it all in and remember my feelings for the rest of my life. I tried to compose myself, but my emotions were all over the place. I had really made it! I was here! I could feel a joy inside me which I assume was some kind of sense of accomplishment, but it was accompanied by a sadness too and I was struggling to make sense of it all.

Kazim began chatting to a couple of pilgrims from Canada and I picked up a tourist leaflet full of information about the city and its remarkable cathedral, which contains the shrine of Saint James. There was a short biography of his life on Earth, which was written in a matter-of-fact style, with very polite terminology, as if the author was a mathematician describing a formula in detail, which was an undisputed, scientific fact – calculus perhaps. It made pleasant reading and there was a comfort in the writer’s absolute and unshakeable belief in the existence of God and it seemed to make my own pilgrimage more important and something to be proud of, way, way more than the mere physical challenge of walking almost the entire width of Spain.

The story immediately takes a sharp twist towards the supernatural, involving the arrival of Saint James’ body at Padrón on the coast of Galicia, closely followed by various relics on some kind of small boat, which was spectacularly unseaworthy. The difficulty didn’t end there. The vessel was handicapped by some kind of malfunctioning rudder, but each time it was drawn off course by currents, strong winds, storms, high waves and violent downpours, the boat was saved by a series of miraculous happenings which included, but not exclusively, the intervention of angels with great powers.

Unless you are a devout Christian you might find this hard to believe, but the author seemed to know what he was talking about and the boat arrived safely with its priceless relics fully intact, somewhere near Iria Flavia. A suitably well-hidden cave was located nearby where the relics were placed before eventually being transported to Compostela. Phew! Quite a story!

I started to take notes and photos so I wouldn’t forget anything, but that plan was soon abandoned. I lost count after 20 pilgrims and before this day was over it could be as high as 50; perhaps more. There were so many people all embracing me in our shared moment of triumph; our 800-kilometre pilgrimage which we all doubted we could complete – but we have. 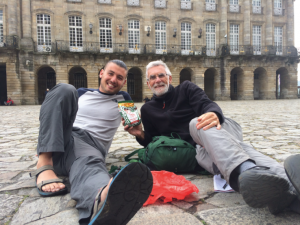 Ron, the ex-army captain, with my gift of Israeli coffee that he had brought with him from Jerusalem

Now there are certain things pilgrims are expected to do in Santiago and the most important is to attend mass at noon. I read in the guidebook that the cathedral seats more than a thousand people, but there were so many pilgrims standing, there must have been a congregation of more than 2,000 worshippers.

I didn’t see Kazim or Victoria again, but he had told me that he was planning to begin his journey to Finesterre tonight. Kazim is a man who hates plans and schedules and arrangements and patterns in his life – the word spontaneous was invented to describe him. I went to bed thinking of Kazim and I was about to post this account of one of the greatest days in my life, when my iPhone alerted me that I had received a message; one final gift from the Camino and I know my life will never be the same.

The message from Kazim said: “I took a stone from the ground when we were walking together. This is our stone; yours and mine. And I’ll throw it from the end of the Earth to the ocean on your behalf! Bless you.”

Miracles on the Camino by Mike Gardner can be downloaded directly onto your Kindle, mobile, tablet or computer from Amazon books for 4.32€. It has 173 pages and more than 80 pictures. It is also available as a hardback and can be delivered to your house in Spain.