Due to the Corona Virus, several events had to be cancelled, so hence I don’t have any news or results to report!  The 18th and final match of the season of the LLB Southern League was cancelled with the consequence that the results after the 17th game gave clubs their final position in Division ‘A’. This meant that MBC finish 7th out of 10 which we are content to accept having been promoted as winners of Division ‘B’ last season. We look forward to challenging even more strongly in Division ‘A’ again next season. 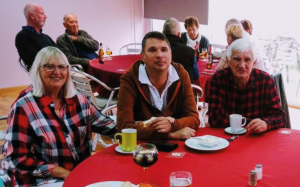 A Day for Andrew was also cancelled.  It was planned that in the summer Andrew Bunce, a former member of MBC and who now has Motor Neurone Disease, would be doing a Tandem Parachute Jump in the UK to raise money for the MND charity. MBC wanted to support Andrew in his venture and had planned a special Fun Day in March.  Andrew came from Cornwall to Spain with his parents Brian and Dawn, also bowlers, to be part of this special day, but sadly we were unable to enjoy the event. Members still made donations and raised £500 for MND. We look forward to an update later in the year on Andrew’s jump.

The MBC Club Championships Presentation Lunch has been postponed till later in the year.

Mike and I enjoy the winter sunshine and playing bowls in Spain, but home is in the UK. Having changed our Bilbao ferry booking to go home three times because of COVID19, we ran the gauntlet by car to Bilbao, staying the night in Vitoria Gasteiz in a hotel that had been told by the Government to close the next day. Buying diesel was not a problem, but ‘aseos’ were, as they were closed! We by-passed several police road blocks and had police pass us on motorbikes on the motorway. Although we were prepared with paperwork and the knowledge that we were allowed to travel to our habitual home should we be stopped, we were very relieved not to have been pulled over.  We were delighted to see our ferry dock even though there was a three hours delay. After our 850km trip, we knew it was the last passenger car ferry from Spain until whenever. All being well we will return to Spain for the autumn season of bowling.  We thought Brexit was our only worry!

A Year Has Passed 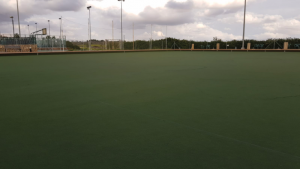 MBC Rink in Lock down

I have been reporting on behalf of MBC in the Costa Cálida Chronicle for a year now, taking over from Doug MacFarlane who always kept readers entertained. I am delighted to say Doug still has a monthly input as he kindly reads my script, adjusting it so it makes for a better read.  Thank you Doug! You mentor me well and I appreciate the time you spend supporting me.  Also thanks to Clive Hoyal, Colin and Gill Appleton and Don Henry along with others who support me with photos and ideas.

MBC bowling rink is closed until further notice.  Harry our Secretary is doing a grand job keeping members informed with the latest news and can be contacted by email at info@mazarronbowlsclub.com