Los Infiernos continues to rehome dogs and several are to first time dog owners. It can be exciting and emotional picking out your new dog, but before you take him home, there are some important steps to follow:

One little dog recently adopted locally, found the gaps in the garden wall his first day in his new home. He has become quite famous and had a massive following on Facebook due to being ‘on the run’ for five weeks. His owners were out of their minds with worry.  He was lost and scared and went into ‘flight mode’. His instincts were to find food, water, shelter and safety.  Even when approached or called by the owner the dog was instinctively fearful and ran away from the ‘threat’. Professional help was sought from Galgos Del Sol and the team spent many hours over weeks tracking him until eventually, the dog was captured.

This month’s selection of dogs are all big boys. 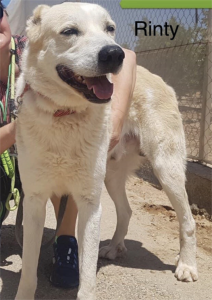 Rinty DOB May 2012 – was probably a sheep dog, abandoned because of his age. His ears have been cut off and he has a stubby tail. He is ok with cats, but must be homed as the only dog. He walks well on the lead and loves a fuss. He just needs somewhere comfortable to rest now his working life is over. 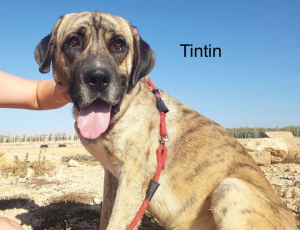 Tintin DOB August 2015 – is a fine example of a Spanish Mastin. The volunteers think he is one of the best boys in the kennel. He is big, beautiful, sociable, strong and loves to walk and play. His cage mate recently left and he is sad as they were very close. 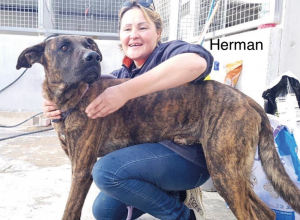 Herman Great Dane Cross DOB January 2016 – was found wandering through the countryside. He arrived at the shelter absolutely terrified. He is very afraid of men but is starting to trust the female volunteers. He is a very good boy, but may take a while to completely trust humans again. It’s horrible to think what he may have been through in his life so far. He is a big boy who has the most beautiful honey coloured eyes and is good with other dogs.

Paypal donations can also be made to the email address.