Although the Spanish Football Federation had announced that the regular season had ended for all football competitions at semi-professional and amateur level, there was still plenty to look forward to with Mazarrón FC due to be involved in the end of season play-offs between the top four teams in the Tercera Group X111 Division to decide promotion. Mazarrón finished their regular season in 5th place, but as Real Murcia ‘B’, who finished in 4th place on the same number of points as Mazarrón, cannot take part in the play-offs, as their first team already plays in the Segunda B division, Mazarrón have qualified for the play-offs.

Mazarrón FC will play Lorca Deportiva in their semi-final play-off game. Although Lorca finished top of the league, Mazarrón will take heart from the fact that they came out on top in their home game in December, winning 2-1, with goals from Musoni and Dani Morales. Musoni was on loan to Mazarrón from Lorca Deportiva, but he was recalled to his parent club early in the New Year and will no doubt be facing his former colleagues in the play-off game. 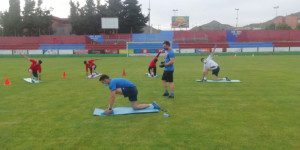 The other semi-final is between Atletico Pupileno, who finished 2nd in the league and Mar Menor who were 3rd. Both games will be played on the weekend of 18th and 19th July at the Pinatar Arena in San Pedro de Pinatar. In previous seasons the play-off games have been over two legs, but this year, if the teams are level at the end of 90 minutes, there will be no extra time and no penalties. The team which finished higher in the league will progress to the final, so Mazarrón have to win. A draw will see Lorca through. 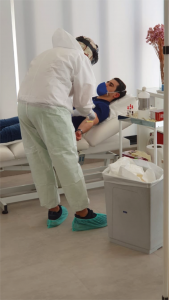 The final will take place the following weekend, again at the Pinatar Arena, with the winners promoted to Segunda B. At the time of writing it is envisaged that the games will be played behind closed doors because of the Covid-19 outbreak. Mazarrón players were allowed to return to training on 1st June after undergoing Covid-19 tests. 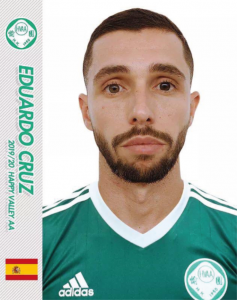 When the first game takes place, it will have been 18 weeks since Mazarrón’s last game; a 2-1 away win at UD Los Garres on 8th March. Goals from Dani Morales and Dani Barrelis earned the points for Mazarrón after going a goal down. However, Mazarrón had two players sent off (Angel Lopez and Nacho) and they will miss the play-off semi-final along with influential midfielder Andreo who is serving a four match ban and will miss both the semi-final and the final if Mazarrón are successful. In addition, Captain Adrian Campoy and midfielder Pablo Serrano will also be missing with long term injuries. However, Mazarrón have moved to sign experienced midfielder Edu Cruz (Francisco Eduardo Cruz Lemaur) to strengthen the depleted squad. Cruz was born in Las Palmas, Gran Canaria and last played for Happy Valley AA in the Hong Kong Premier League. He is 33 years old and 6 feet tall and has extensive experience having played in Iceland and Norway as well as throughout Spain.

At the time of writing, discussions are taking place to decide whether it will be possible to re-arrange the Los Amigos de Mazarrón FC Gala Week events which were postponed in March because of the Coronavirus. Obviously we need to await guidance from the Regional Authorities when the State of Alarm ends, but we are considering options to stage the Race Night, Golf Day and Gala Dinner later this year. A final decision was due to be taken by the Executive Committee before the end of June as to whether the event should go ahead. In any event, if suitable dates are found, those who have already purchased tickets will have the option of a refund if they wish.

We are still taking bookings, but we need to firm up on numbers to ensure that we have sufficient people to make the trip viable before confirming the booking.  If there is sufficient interest we be asking for a deposit of €50 pp by the end of July, with the balance payable by 31st August.  B & B accommodation will be at the AR Roca & Esmeralda Spa Hotel with an excursion to Guadalest on the Tuesday and the Chocolate Factory in Villajoyosa on the return journey on Wednesday. The cost of a twin room with balcony, terrace, private bathroom and free Wi-Fi is €125 pp to include coach and any excursions.

We would be grateful if those who have already indicated their interest to confirm by 15th July.

Los Amigos de Mazarrón FC hold weekly meetings throughout the football season and new members or guests are very welcome. These meetings take place every Thursday at The Club House, Camposol C at 4pm.  Business meetings are held on the last Thursday of each month when only members can attend. Membership is €20 with discounts available on most social events and coach travel to away games. Member’s partners are entitled to the same discounts as members, but are not allowed to attend and vote at Business Meetings.

Email pamada.1130@yahoo.co.uk for a membership form.