Like everybody, I am at home on lockdown and hoping the situation will have significantly improved by the time you are reading this article. Fortunately, we live in the countryside and have a fairly large garden. The restrictions aren’t as difficult for us as they must be for somebody living in an apartment, but I am still missing the mountains and countryside. However, prior to the emergency measures being introduced I managed to go birding and enjoyed several trips during the last week before confinement. 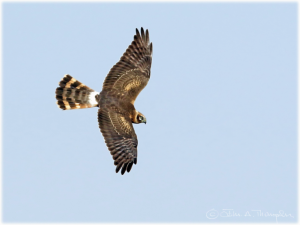 On the last outing I went to the Saladares del Guadalentín (between Alhama de Murcia and Camposol) encouraged by the fact that local birders had reported seeing a juvenile Pallid Harrier (Cercis Macrourus) in this area. It was a bird I had never previously seen, but had read about occasional records of vagrancy to Western Europe. Its home-breeding range is in Asiatic Russia, Kazakhstan and North-west China; far from our shores. After breeding it migrates via the Bosphorous or the toe of Italy, to spend the winter in either the Indian sub-continent, South-east Asia or sub-Saharan Africa. It is certainly not a bird you would expect to see wandering around in Murcia. It is a species with an interesting history. It suffered a population decline in the 1990’s due to the introduction of intensive agriculture of the steppes and wet pastures of its breeding range. Also, the extensive use of pesticides to control locusts in its wintering areas had a very negative impact. However, since the turn of the century, numbers may have started to increase as it is now being seen more frequently in Western Europe. In 2011 there was an influx of birds that over-wintered in various countries and much to everybody’s surprise, a pair bred successfully in 2017 and raised 4 young in the northern province of Groningen, Holland. 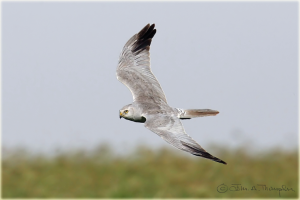 It was the first time this species had bred in Western Europe. Equally surprising was that a pair also bred in Castilla y León last summer and raised 2 young. Another surprise was that the female was one of the chicks from the 2017 nest in Groningen (identified because it had been ringed).

This is good news, but it leaves the experts with a wildlife puzzle that has yet to be solved. Is the global population increasing and colonising new territory, or is it merely shifting due to climate change and habitat deterioration in its home range?

Besides the Pallid Harrier, there are another 3 species of Harrier found in Europe and all can be seen in the region. They are medium-sized birds of prey with relatively long wings and tails and a characteristic hunting style of flight. It consists of a leisurely low flight of several wing beats before gliding with slightly raised wings as they quarter the ground, in the hope of surprising small mammals, reptiles or birds.

Returning to my search for the Pallid Harrier, I went to the southern end of Saladares del Guadalentín where there is an uncultivated area of low growing saline vegetation. It had been seen near there a few days earlier according to my information. My search was carried out by slowly driving around the field tracks, quartering the ground as best I could. A few minutes after starting I noticed a couple of large birds perched on the electric pylons that required further investigation. As they were a bit distant I viewed them through the telescope and was disappointed that both were juvenile Golden Eagles (Aquila Chrysaetos). 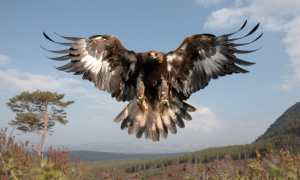 I would normally be delighted to see them, but on this occasion I was clearly focused on the search. Juvenile Golden Eagles can be distinguished from the adults because they have white patches on their wings and the inner part of the tail. As they age they will gradually lose the white on their plumage and become a more uniform dark brown colour. The golden hues are only noticeable when seen closely and with good sunlight. 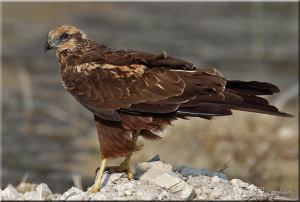 As I continued driving I saw a distant bird flying low over the ground that was clearly a Harrier, but this one looked larger and with heavier, wider wings than my target. As it got closer it confirmed my first impression; it was a Marsh Harrier. It proved to be a female with uniform brown plumage and a creamy-golden crown and throat. Another good bird, but not what I was looking for. 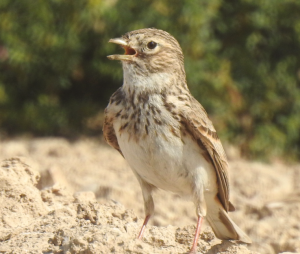 Further along I became somewhat distracted by some ‘little brown jobs’ (LBJ’s) that were flitting about on the ground in between the plants of Marsh Samphire (Salicornia species) and stubbornly refusing to stay still so that I could identify them. They were quite small; pale underneath with slight streaking on the upper part of the chest. I managed to get a reasonable photo which helped me confirm that they were Lesser Short-toed Larks (Calandrella Rufescens). 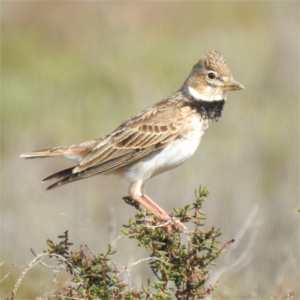 They are scarce residents in the region, so I moved on very happy to have seen them and looking for other small birds that might be hiding in the low vegetation. My eye was obviously getting attuned as it wasn’t long before I picked out other LBJ’s, but this time a lot easier to identify. They were the slightly larger Calandra Larks (Melanocorypha Calandra) that have a very characteristic white trailing edge to their wings when in flight and if seen on the ground, a very noticeable black patch on their lower neck. It is another nice bird to see and found only on the steppes and plains of the region. 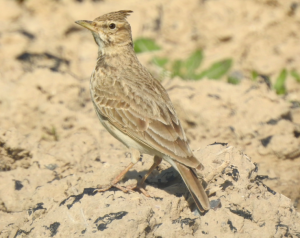 In the same area were Crested Larks (Galerida Cristata) which are very common, but very difficult to distinguish from their practically identical relative the Thekla Lark (Galerida Theklae). Larks are a topic for another day and by now I had become seriously distracted by them so decided to concentrate a bit more on the skyline searching for Harriers. 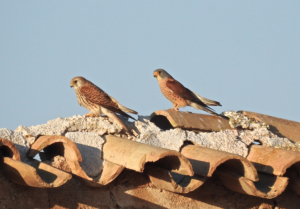 Continuing along the tracks it was good to see that the summer-visiting Lesser Kestrels (Falco Naumanni) were already back in the area where the artificial nest boxes had been erected. It is a species that is officially categorised as being in danger of extinction within Murcia because there are only small breeding colonies in just 5 or 6 different locations across the region. They are slightly smaller and more elegant than their close relative the Common Kestrel (Falco Tinnunculus). The females of the two species appear similar, but the Lesser Kestrel males have a cleaner, neater and less spotted plumage. Feeding primarily on insects, they are very vulnerable to both changes in agricultural practice and the increased use of pesticides. They are migratory and over-winter in areas such as Western Sahel and the borders of Mauritania, Mali and Senegal. 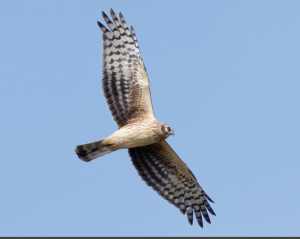 Hen Harriers (Circus Cyaneus) are winter visitors to our part of the world and although fairly uncommon, are seen here regularly and especially at this site. They have received a lot of publicity in the UK press because of their persistent persecution by the grouse-shooting fraternity. As a breeding bird in Great Britain it is now close to extinction. 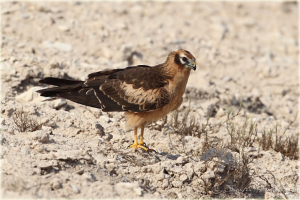 Montagu’s Harrier (Circus Pygargus) is a scarce summer visitor, but my trip was on 12th March; probably a bit too early for them to have arrived. 3 or 4 weeks later it would definitely have been a good possibility. The juvenile Pallid and Montagu’s Harriers look very similar. The bird I was watching turned out to be a Hen Harrier; an excellent bird to see in normal circumstances, but on this occasion slightly disappointing. After 4 hours of searching I decided to head back towards my start point on the Saladares and try my luck there.

Driving along I could see a group of Spanish birders in the distance with telescopes scanning the area and presumably they were looking for the same bird. Instead of heading directly towards them and disturbing anything they may have found, I turned to the left and worked my way parallel to them across the open ground. As I progressed, another Harrier flew low across the track a little way in front of me, but then I lost sight of it. That was puzzling, so I carefully got the telescope out of the car and started to scan the area where I had last seen it, but the horizon was clear. Maybe it had landed? I then scanned the ground in front of me and lo and behold, there was a juvenile Harrier on the ground.It had an orangey-rufous chest, so it was either a Montagu’s or a Pallid. The conclusive evidence I was now looking for was a dark ring around the side and rear of the neck with a very light collar in front.

It had a collar! At last I had my very first sighting of a Pallid Harrier. I managed to get a blurry photo just to prove to myself and others that it was a clear ID. I was a very happy bunny as I drove back North to the mountains of Ricote!

The photos of Pallid, Montagu’s and Marsh Harrier were taken by a birder/photographer I recently met at El Hondo; John Thompson. John has kindly given me permission to use them in the article. I think you will agree that they are amazing photos.

You may have noticed that instead of putting the Spanish name in brackets, I have now reverted to using the Latin name after a request from a reader who isn’t British and doesn’t necessarily recognise English bird names. I’m quite happy to oblige as this is the officially accepted way of doing it and used in all the bird guides.